Toby Keith is flirting his way across the country this summer on his Good Times and Pickup Lines Tour! Enamoring the crowds with his sunny country anthems and larger-than-life personality, (plus the chance to buy some of his signature Wildshot Mezcal if you're that way inclined…), Keith sure knows how to throw a good party! Get down to DTE Energy Music Theatre on Saturday 27th June for a wild night! 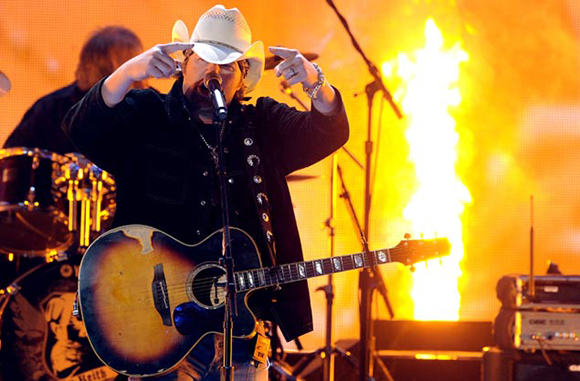 More than just one of America's hardest working and popular modern country artists, Toby Keith is an institution. The springboard for Keith's astounding career came in the shape of his 1993 smash hit single “Should've Been a Cowboy”, which went straight to number one in the Billboard Hot Country Songs chart, and by the end of the decade was the most-played song of the 1990s. He built upon his earlier success when his breakthrough single “How Do You Like Me Now?!” became the number one country single of 2000. Keith has released seventeen studio albums in total, amassing 41 top ten hit singles, including 21 number ones. Overall, he has sold more than 40 million albums worldwide, and he shows no signs of slowing down, with an upcoming album on the way!