The Black Crowes are coming to rock the stage at DTE Energy Music Theatre on Thursday 29th July 2021! As they celebrate their iconic debut album, The Black Crowes will be back on the road for 2021 on an exclusive tour to bring back all of the memories of when they first began. Their 2021 tour fittingly titled 'Shake Your Money Maker' will heading to a venue near you – don't miss this incredible concert! Tickets are now available to book – secure yours right here today! 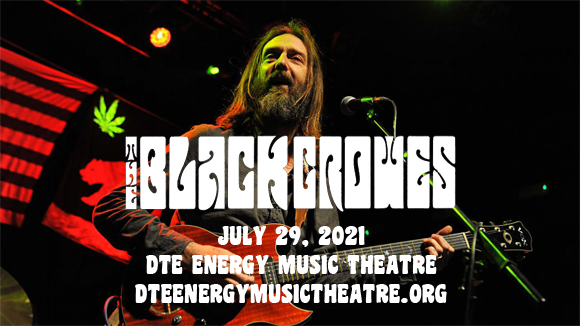 The American rockers The Black Crowes built up their steady reputation on the music scene and are known for their legendary releases during the 1980's, during that time they gave to the world their debut album, Shake Your Money Maker all the way back in 1990. Now fast forwarding to 2021, The Black Crowes will be embarking on an extensive tour to celebrate that world famous album.

Throughout the years The Black Crowes have released other groundbreaking records such as The Southern Harmony and Musical Companion, which topped the Billboard 200 in 1992 and continued to produce music all the way up until today, after a hiatus between 2002 – 2005. After re-forming they once again made it into the top 5 with Warpaint and have since showcased their amazing career through greatest hits and acoustic releases. 2010 marked an incredible twenty years since they first started and are now back on the road to celebrate their debut. Together they have showcased their music and sold over thirty million albums worldwide, have been highly praised and recognised for their work, particularly with Money Maker and were titled as the most rock and roll band in the world.

This amazing triumph is clear to see when listening to The Black Crowes, but it's even better when caught live during their performances. Join this iconic group as they travel across North America for 2021 and touch down at DTE Energy Music Theatre this coming Summer! Fan's should not miss this once in a lifetime experience – grab those tickets, tell all your friends, this is the place to be!