Ted Nugent is Rockin' America Again this summer, and he comes to DTE Energy Music Theatre on Friday 20th July 2018! The veteran performer is keen to be back on stage playing all the hits fans love:

"It is my moral, physical, patriotic and spiritual obligation to take the best rock-n-roll to the masses every summer, so here we go again," he gushed in a press release. "50+ years and running to make America rock again, like I do every year!" 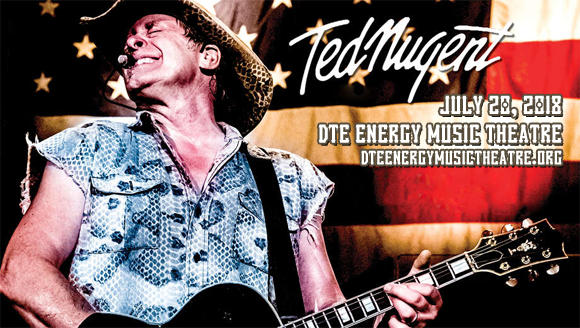 Originally finding fame as lead guitarist of 1960s psychedelic rock band the Amboy Dukes, Ted Nugent is an American singer-songwriter, guitarist and activist. Signing to Epic Records in 1975, Nugent embarked on a solo career, releasing a string of multi-platinum albums throughout the 1970s: Ted Nugent (1975), Free-for-All (1976) and Cat Scratch Fever (1977). Nugent has released fourteen solo albums to date. In addition to his music career, Nugent is a noted advocate of hunting and gun ownership rights and is noted for his conservative political views and his lifelong stance against drug and alcohol abuse.