If you love rock 'n' roll, you're in luck! "Show Me the Way" hit-makers Styx are teaming up with rock icon Joan Jett and her band The Blackhearts for a co-headlining tour that comes to DTE Energy Music Theatre on Friday 6th July 2018! Adding to the chart-topping tunes and raw energy that these epic bands bring to the stage will be hair-rockers Tesla, who will be performing in support! What a line-up! 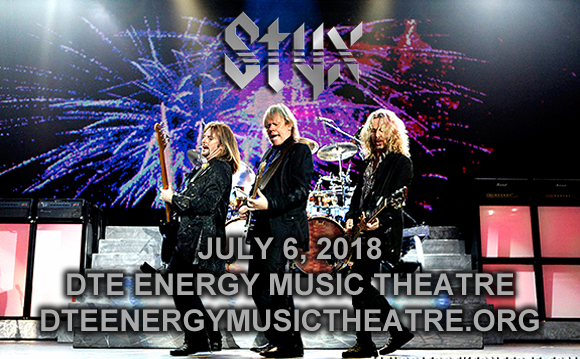 American rock band Styx formed in Chicago, Illinois in 1972, signing to Wooden Nickel Records after being spotted by a talent scout, and releasing their debut album later that year. After several moderately successful releases in the early and mid-1970s, the band's breakthrough came in 1977 with the release of The Grand Illusion, which marked the first of four consecutive multi-platinum-selling albums: The Grand Illusion (1977), Pieces of Eight (1978), Cornerstone (1979) and Paradise Theatre (1981). The band has had sixteen Top 40 singles over the years, including the hits "Lady", "Come Sail Away", "Babe", "The Best of Times", "Too Much Time on My Hands" and "Mr. Roboto". After disbanding in the mid-1980s, the group re-formed a decade later and have been a solid touring presence ever since. The Mission, the band's most recent album, was released in 2017.