Get ready for the heavy as Shinedown & Godsmack team up to bring you one of the hottest hard rock shows of the summer! Coming to DTE Energy Music Theatre on Sunday 22nd July 2018, you can catch these goliaths of entertainment performing a full headlining set each:

“It’s all about impact, and making a statement. We are creating a show for the fans that is powerful, passionate, and sonically inspiring," says Shinedown frontman Brent Smith. 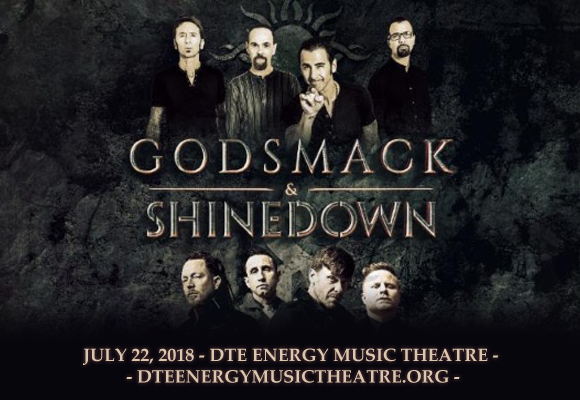 Shinedown is an American rock band, formed by singer, songwriter and musician Brent Smith in 2001 in Jacksonville, Florida, after his previous band, Dreve, was disbanded. Still signed to Atlantic Records after the dissolution of Dreve, Smith recruited members to join Shinedown. Leave a Whisper, the band's debut album, was released in 2003, launching the singles "Fly from the Inside," "45", a cover of the Lynyrd Skynyrd song "Simple Man", and "Burning Bright". The songs all charted in the top five of the Billboard Mainstream Rock chart, and the album eventually earned platinum certification by the RIAA. To date, the band has sold over ten million records worldwide, and has charted eleven number one singles on the Billboard Mainstream Rock charts, the third most of all-time.