Country fans, get excited!! The DTE Energy Music Theatre is proud to present the awesome Rascal Flatts with special support from the amazing Dan and Shay AND Carly Pearce on Saturday 18th August 2018!! Get ready for an exciting live show of music that you’ll never forget – don’t miss out!! Get your tickets NOW!! 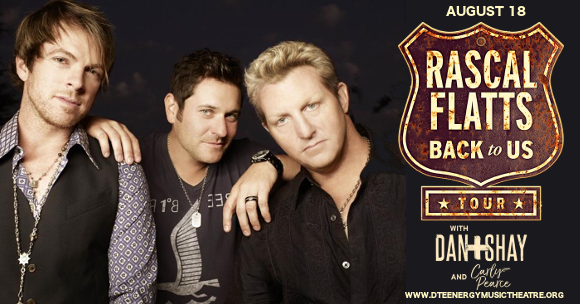 Formed in Ohio in 1999, Rascal Flatts are a 3-piece band formed of Gary LeVox, Jay DeMarcus and Joe Don Rooney. In 2000, they were signed to Disney Music Group's Lyric Street Records. Over the course of the next ten years, they released 7 albums, ALL of which have achieved Platinum or higher certification from the RIAA!
The band are now on tour with their latest album, “Back To Us,” their twelfth top-10 album on the Top Country Albums chart. According to the band, the album takes the band back to their roots. ”I think it happens with every career when you've been around 10 or 12 years," Jay DeMarcus reflected in an interview. "You start to get on cruise control a little bit, then you freak out and go, 'Oh my gosh, we've got to change some things up.' Then you go too far one way, and you have to take a deep breath and say, 'Wait a minute, people fell in love with us for distinct reasons. Let's get back to what it was people loved about us at first.'"

Get ready to fall in love with them all over again on August 18th – have you got your tickets yet??