Foot stomping rockers, Mumford and Sons are coming to DTE Energy Music Theatre on Tuesday 16th June 2015! Mumford and Sons exploded on to the music scene and after just a few years in the making, headlined Glastonbury Festival in 2013 – any bands lifelong dream! Their energetic indie folk crossed with traditional bluegrass is the perfect recipe for a good ol' knees up and a powerful sing-a-long, do not miss out on this incredible night! 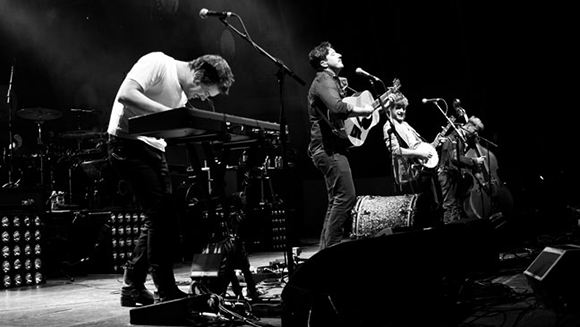 In such a short space of time of 4 years, Mumford and Sons have taken the world by storm! They have received an impressive total of eight Grammy nominations for their 2012 album, Babel and won the Grammy Award for Album of the Year. The band also won the Brit Award for Best British Group in 2013 which rocketed them into absolute stardom and gave way to being offered to play at Glastonbury Festival 2013. Mumford & Sons have released two epic studio albums: Sigh No More in 2009 and Babel in 2012, along with the exciting new album Wilder Mind, which is due to be released later this year. Their debut Sigh No More peaked at number two on the UK Albums Chart and the Billboard 200 in the US! And included anthemic tracks such as 'Little Lion Man' and 'The Cave'.
Their incredible merge of sound is created by traditional folk & bluegrass instruments; banjo, mandolin, double bass and acoustic guitars. With every string that is plucked and every foot that is stomped, it is clear that Mumford and Sons live and breathe for music. Their live energy is on fire, enough to give any one goosebumps.