Fall Out Boy have had a busy year with the Release of their latest album Save Rock and Roll and now thier latest tour Monumentour which is sweeping America on various dates. The tour includes supporting band Paramore and is making it's way to the DTE Energy Theatre on Tuesday 8th of July. Get your tickets now! 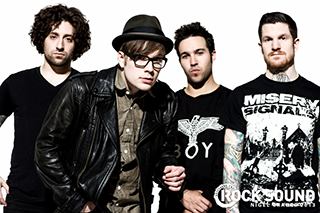 Fall out boy are heavily influenced by pop-punk, rock. They got their big break in 2005 with the album Under The Cork Tree, producing two major hits "Sugar, We're Goin Down! and "Dance, Dance". transforming the group into superstars and making Wentz a celebrity and tabloid fixture. heir 2007 follow-up, Infinity on High, landed at number one on the Billboard 200, and produced several hit singles, "This Ain't a Scene, It's an Arms Race" and "Thnks fr th Mmrs".

Catch two of the biggest bands in modern rock live at the DTE, tickets available now!