Listen up Southern rock fans – this could be your very last chance to see the legendary Lynyrd Skynyrd live!! This summer, they’re embarking upon the Last Of The Street Survivors Farewell Tour, coming to Michigan’s DTE Energy Music Theatre on Friday 10th August 2018 and you can be there!! Tickets are going to disappear FAST for Lynyrd Skynyrd’s last ever major tour – hit that “Buy Tickets,” button NOW to be sure of your place!! 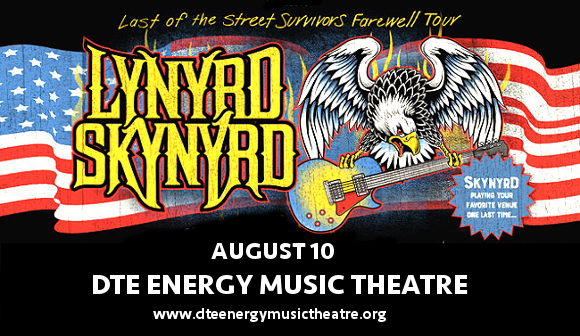 Although the tour has been called a farewell tour, Lynyrd Skynyrd have reassured fans that this isn’t a complete goodbye, but rather an end to at least the major touring aspect of the band’s career – the band have plans to release another album and play special one-off concerts. Gary Rossington, the band’s only original member, is very open about the reasons for the change in direction. ”My health isn't very great, so it's harder for me to tour these days, and everyone's got kids and families and grandkids now… So we're just gonna kick back a little bit because of our age, and I just want to go out on a high note and make sure the band's name stays in high regard instead of going out and playing fairs and casinos and things like that. I want to live it still filling arenas and sheds like we still can.”

Makes sense to us!! Are you ready to be part of Lynyrd Skynyrd’s farewell journey?? Grab those tickets NOW, before they go!!