Southern rock pioneers Lynyrd Skynyrd will be tearing up the stage at DTE Energy Music Theatre on Saturday 29th August! The world-famous legends are being supported by Grammy-nominated bluegrass maverick Chris Stapleton, for a night of hard boogieing!

“People may say, ‘they need the money,’ well I don’t think any of us need the money, it’s just that we love the music, it’s bigger than the money, it’s not even about that any more. We have to make a living, sure, but it’s about the legacy of Lynyrd Skynyrd, and what it stands for, what the fans are all about. There’s nothing like getting out there playing a great show with Skynyrd and seeing people love this music.” – Van Zant 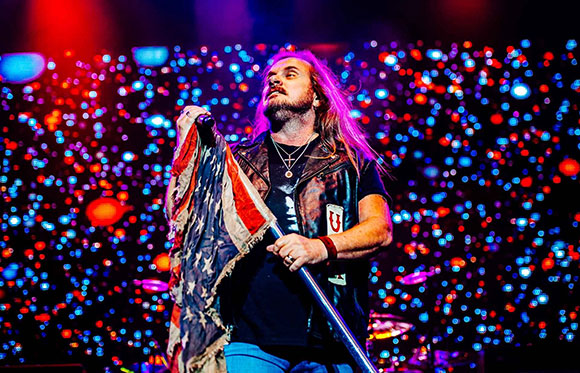 Lynyrd Skynyrd are best known for their signature tunes "Sweet Home Alabama" and "Free Bird". Formed in 1964 by three teenage friends, the band went through several incarnations before they released their self-titled debut album in 1973. Four years later, at the height of their popularity, three members of the band died in an aeroplane crash, putting an abrupt end to their most successful incarnation. Lynyrd Skynyrd disbanded after the tragedy, but reunited in 1987 after a ten year hiatus. The re-formed band continues to tour and record with co-founding member Gary Rossington and core members Johnny Van Zant (younger brother of original lead singer and founding member Ronnie Van Zant), along with guitarist Rickey Medlocke, who recorded with the band for a short time in the early 1970s. Lynyrd Skynyrd was inducted into the Rock and Roll Hall of Fame on March 13, 2006.