Get ready guys and gals, one of the best acts in country is on its way to the DTE Energy Music Theatre!! On Friday 30th June 2017, we play host to the amazing Lady Antebellum, with phenomenal support from new artists Kelsea Ballerini and Brett Young!! Do NOT miss out on your chance to see these award-winning, top-selling artists live – click the “Buy Tickets,” button now and BE THERE on the 30th!! 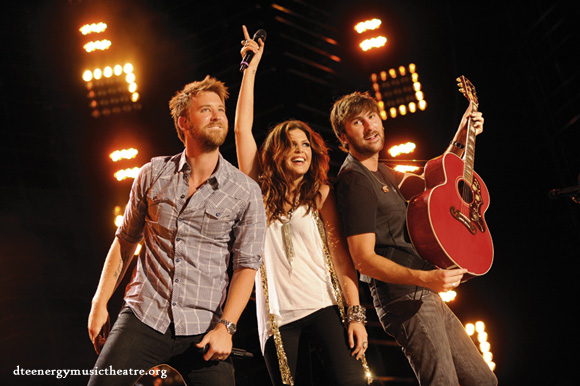 If you want unbeatable country music, look no further than Lady Antebellum. Making their first major appearance in 2007 as guest singers on Jim Brickman's “Never Alone,” single, they were signed by Capitol Nashville straight away and went on to release an amazing series of albums and singles. No less than sixteen of their singles have charted, with NINE hitting number one. Teir single “Need You Now,” was truly a spectacular release, spending over a month at the number one spot in 2009!!! Of their six albums, three are certified platinum and higher.

Nominated and winning multiple awards, Lady Antebellum were named Top New Duo or Group by the Academy of Country Music and earned the title of New Artist of the Year from the Country Music Association in 2008. They've been nominated for multiple Grammys, winning “Best Country Performance by Duo or Group,” “Song of the Year,” “Record of the Year,” and “Best Country Album,” many of which they also won at the ACM Awards more or less at the same time!! Today, they've sold more than 10 million albums in the United States.

If you aren't already part of the hype surrounding Lady Antebellum's upcoming performance, prepare to be amazed. It's going to be an unforgettable show!!