This year, Lady Antebellum embark on their first outing on the road since 2018! The 40-date Ocean 2020 Tour runs from May through September, and will be coming to DTE Energy Music Theatre on Saturday 22nd August 2020! It follows a year when the seven-time Grammy Award-winners spent their time on stage performing the 15-date Our Kind of Vegas residency, and will be a welcome change of pace back to heaving and excited crowds of fans, ready to sing along and have a good time! OF course, no good show would be complete without strong support acts, and this year Lady Antebellum are joined by Jake Owen & Maddie and Tae! 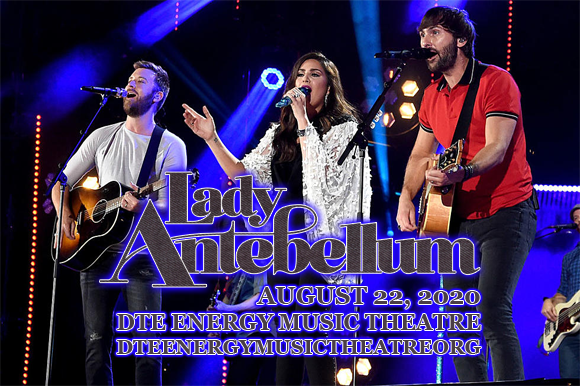 There are few bands that can truthfully claim overnight success, but Lady Antebellum's ascent to stardom came quickly – within a year of forming in Nashville, Tennessee, the country trio (made up of Hillary Scott, Charles Kelley, and Dave Haywood) had reached number 14 on the Adult Contemporary Chart when they were featured on the 2007 Jim Brickman single "Never Alone." And all without a record deal! This situation soon changed when Capitol Nashville signed them later that year and set them to work on their self-titled debut album. The album was released in 2008 and was an instant hit, reaching number four on the Billboard Hot 100 and debuting at number one on the Billboard Top Country Albums chart – a first for any new group or duo. They have since released a total of eight successful studio albums, and have charted sixteen singles on the Hot Country Songs and Country Airplay charts, including nine number ones. They have also won a multitude of awards, including seven Grammys, six CMA Awards, five CMT Awards, four AMA Awards, nine American Country Awards and eight ACM Awards, among others. They released Ocean, their most recent album, in 2019.