Two of the biggest names in pop are joining forces, and they're coming to a theatre near you! The Adventures of Kesha & Macklemore Tour comes to DTE Energy Music Theatre on Wednesday 18th July 2018, bringing the "Good Old Days" pair together for a night of hot, hot hits! Both Kesha and Macklemore released brand new albums in 2017 and fans have been eager to enjoy their new material live – don't miss your chance! 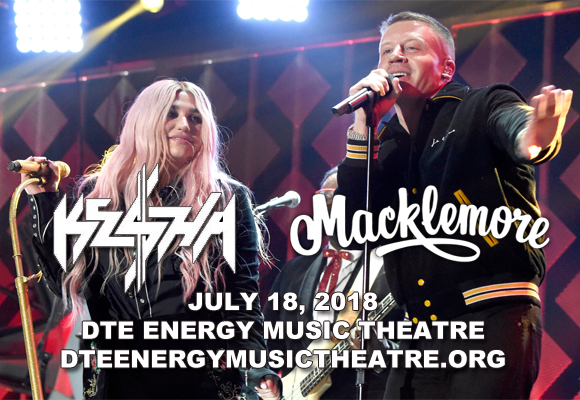 American singer, songwriter and rapper Kesha's first foray into the charts was in 2009 as a featured singer on the Flo Rida track “Right Round”. Since then, Kesha has gone on to carve out a solid career for herslef, with hit singles like "Tik Tok" (which at one point, was the best-selling digital single in history, selling over 14 million units internationally), "We R Who We R", "Timber" and "Die Young" all reaching the Top Ten. Her debut album, Animal (2010), launched straight to number 1 in several countries, winning the MTV Europe Music Award for Best New Act the year it was released. Kesha's third studio album, Rainbow, was released in 2017.