Fans of Keith Urban, get ready for the most epic tour of the summer!! The country star is hitting the road with the wonderful Kelsea Ballerini in support of his new album “GraffitiU!” They’re on their way to shake things up at the DTE Energy Music Theatre on Friday 22nd June 2018 – don’t miss out!! Get your tickets NOW! 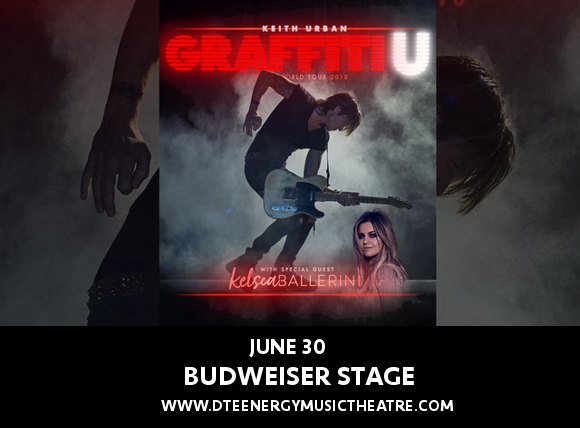 Starting out in a band called The Ranch, Keith Urban found himself with two charting singles on the Billboard Hot Country Songs chart. Branching away from the band in 1999, he released his first solo album and immediately saw his first number one hit on the Hot Country Songs chart with the single "But for the Grace of God”. “GraffitiU” marks Keith Urban’s 11th album.

“I’ve been full-on writing, recording, collaborating and creating with some incredibly talented people for Graffiti U, a lot of whom I’ve never worked with before,” Keith Urban enthused about the new album. “I can hear how some of the songs will translate live already, which really makes putting on a new show so exhilarating and I loved having our fans included in the announcement of the tour because it’s their tour too.”

We can hardly wait to hear all the new songs live – can you?? Get your tickets ASAP for your chance to see Keith Urban and Kelsea Ballerini LIVE while they last!!