Not content with releasing his exciting new album, The Search For Everything, in installments throughout this year, multi-platinum-selling singer songwriter John Mayer is giving fans a tour like no other! Mayer comes to DTE Energy Music Theatre on Friday 1st September 2017, and will be performing three sets full of hits: with a full band, as an acoustic solo act, and with the John Mayer Trio! Don't miss this incredible show! 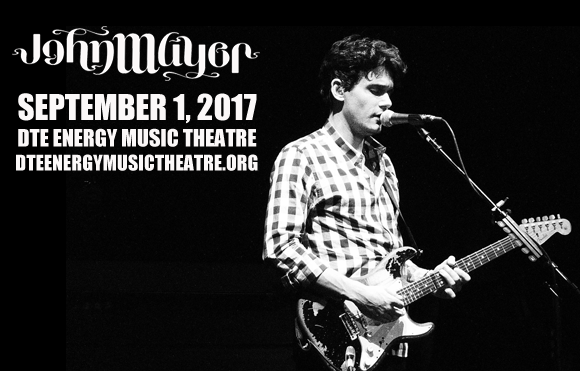 American Grammy Award-winning singer, songwriter, guitarist and producer John Mayer first embarked on a music career aged nineteen, after leaving Berklee College of Music after two semesters, forming a duo called Lo-Fi Masters with Zac Brown Band member Clay Cook. Mayer parted ways with Cook, but continued to pursue a career as a solo act, gaining the attention of major labels with a 2000 performance at South By Southwest Festival. He released his multi-platinum-selling debut album, Room For Squares, in 2001 on Columbia Records. His 2003 follow-up, Heavier Things, did similarly well with sales, and earned Mayer a 2007 Grammy Award for Best Pop Vocal Album, and as well as Best Male Pop Vocal Performance for "Waiting on the World to Change". Mayer has also released music as part of the John Mayer Trio as well as, more recently, Dead & Company, with three former Grateful Dead musicians, and he has collaborated with several notable blues musicians including B. B. King, Buddy Guy, and Eric Clapton. He has released six studio albums to date, and as of 2014, he has sold a total of over 20 million albums worldwide.