Come to place where Southern rock, country, rhythm, and blues rules! Check out the headmaster of southern rock music, Hank Williams Jr. setting new rules on how to enjoy a country rock concert at the DTE Energy Music Theatre on Sunday 17th August 2014. 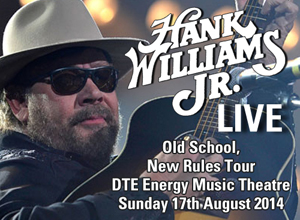 The Old School, New Rules tour is now in full swing, with headmaster Hank Williams, Jr. in command control of the music.

Yes, here comes the son…Hank Williams, Jr. has stepped out of the shadow of his famous father Hank Williams (Sr) and found his own place to shine in the constellation of the country music scene. His career began on a rocky start, as he was trying to fill in his father's shoes by imitating his style. Slowly but surely, he found his voice and even defied the traditional country music by creating his own country blended style by infusing flavors of southern rock and blues.

He's the chip off the ol' block but he's taken old school country up a notch with his new country rock rules! Yup, catch Hank Williams, Jr in his "Old School, New Rules Tour" this summer Get your tickets now!