Responsible for some of the biggest (and definitely most catchy) radio hits of the '70s and '80s, unstoppable soul-pop duo Hall and Oates are back on tour once again, and they're bringing their show to DTE Energy Music Theatre on Saturday 21st August 2021! The beloved twosome are impeccable musicians who continue to show their love of the craft with every single concert they perform, and after 50 years of playing together, they are experts at pleasing a crowd! Speaking of crowd pleasers, the legendary pair have curated a perfect support line-up in the form of KT Tunstall and Squeeze! 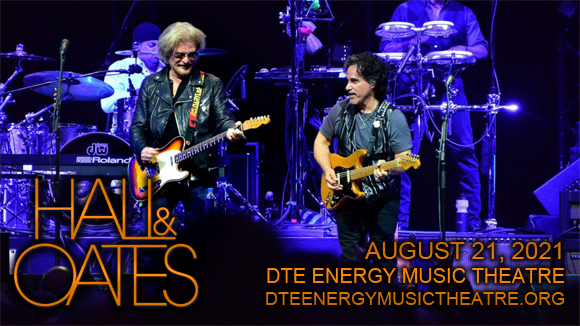 A timeless and iconic duo that dominated the radio waves throughout the late-1970s and early-1980s, Daryl Hall and John Oates met at Philadelphia's Temple University, and wrote, recorded and performed together for several years before having a breakthrough hit in 1976 with the song "Sara Smile." From then on, they gradually became the best selling music duo in history, with over 40 million records sold throughout their career. The genre-bending pair have charted a total of 34 hits on the Billboard 200, including the number one singles "Rich Girl", "Kiss on My List", "Private Eyes", "I Can't Go for That (No Can Do)", "Maneater", and "Out of Touch." They have also released seven RIAA platinum albums, and six RIAA gold albums, and have been honored with inductions into the Songwriters Hall of Fame (2003), Rock and Roll Hall of Fame (2014) and the Hollywood Walk of Fame (2016).