If you love your country with a rockin' edge, you're in luck! Award-winning duo Florida Georgia Line, are bringing their Dig Your Roots tour to DTE Energy Music Theatre on Friday 17th June 2016! The hugely popular pair are known for their energetic shows and party vibes, and this show will be no exception! Plus, with support from Cole Swindell, The Cadillac Three & Kane Brown, there's a wealth of country talent all in one night! 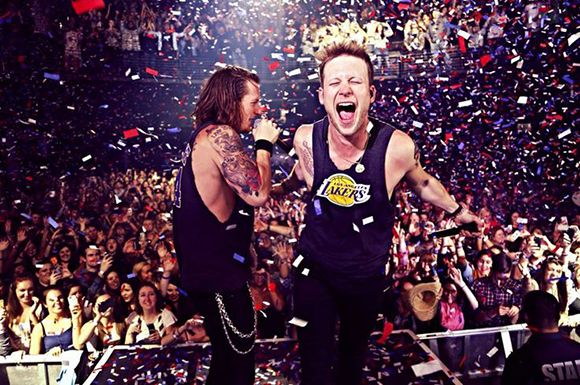 Formed in 2010, Florida Georgia Line are a “bro-country” duo. Their career was kickstarted when they were stumbled upon by Joey Moi, producer of the rock band Nickleback, playing at a county fair. 2012 saw their single “Cruise” reach successful heights on iTunes, leading to major label attention for the pair. This lead to the pair signing with Republic Nashville/Big Machine Label Group. “Cruise” went on to become their signature anthem, spending 24 weeks at number 1 on the Hot Country Songs chart; the longest stay at number 1 in the chart's 70-year history. It was also ranked as the number 1 country single of 2013 by Billboard and reached 8x platinum. 2013 also saw the band release their debut album, Here's to the Good Times, which topped the charts, staying at number 1 on the Billboard Top Country Albums chart for ten weeks, and going on to be certified double platinum.