If you’re a fan of Dierks Bentley (and why wouldn’t you be) then we’ve got some fantastic news for you!! With extra special guests, previous tourmate Jon Pardi, and new face on the scene Tenille Townes, he’s hitting the road in 2019, coming to the DTE Energy Music Theatre on Saturday 29th June 2019! It’s going to be a truly incredible concert that you’ll remember for the rest of your life, so do NOT miss your chance to grab tickets – get ‘em before they’re gone!! 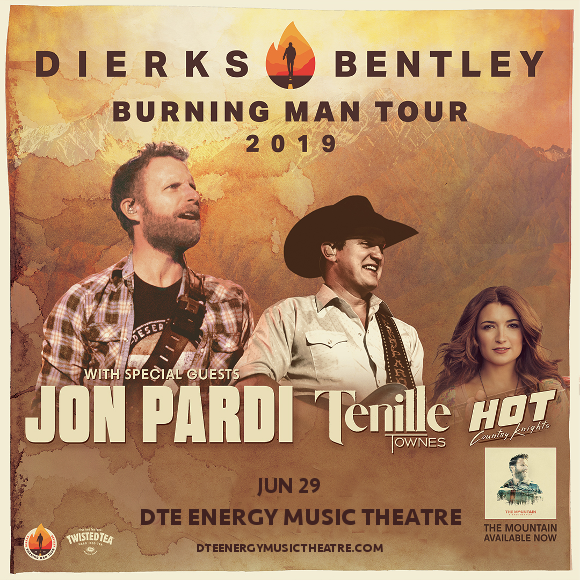 Do we need to introduce this superstar?? With several platinum-certified albums, millions of records sold around the world, and one massive sold-out tour after another under his belt, he is one of country’s greatest. An incredible 25 of his singles have appeared on the Hot Country Songs and Country Airplay charts, with 17 hitting the number one spot.

Now, Dierks Bentley is touring with his latest album “The Mountain,” one that reflects a great deal on his own personal and musical growth over the course of his long and successful career. "I think every album is a chance to check in with yourself and hopefully see that you've come a little farther in your evolution as a person,” he said in an interview. “You’re either growing or dying, and I want to be actively involved in adjusting my game and evolving. It's the only way to do it."

Get ready to see this evolution in person – do you have your tickets to see Dierks Bentley live yet???