Ok – who’s hyped for this once-in-a-lifetime show?? That’s right, two massive icons of the 80s, Billy Idol and Bryan Adams, are joining forces in 2019 for an 8-night co-headlining run of shows across the US!! With special guests yet to be announced, they’re bringing this epic performance to the DTE Energy Music Theatre on Wednesday 7th August 2019!! Grab your tickets now and get ready to sing your lungs out live!! 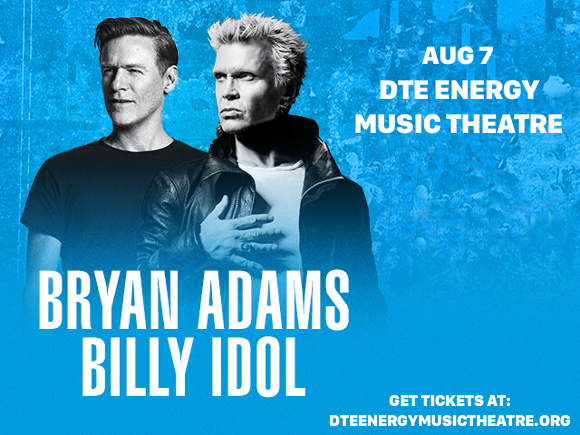 Initially gaining recognition with the punk rock band Generation X, who disbanded in 1981, Billy Idol went on to forge a phenomenally successful solo career, starting with the release of his debut album “Billy Idol,” in 1982, which was popular both in the UK and the US. His video singles for "Dancing with Myself" and "White Wedding" earned regular play on MTV. Today, he remains one of the most influential figures of his generation.

As for Bryan Adams, after he released his third album “Cuts Like a Knife,” he became known just about all of Canada and the United States. His album “Reckless,” produced some of his biggest hits, including “Summer of 69,” and “Run To You,” and catapulted the singer to the forefront of popular music worldwide. His song "(Everything I Do) I Do It for You,” written for the film “Robin Hood: Prince of Thieves” earned him a Grammy Award, a trend that was to continue no less than 14 more times!

A show like this is unlikely ever to happen ever again – make sure you’re there to witness the phenomenon for yourself!! Tickets are on sale NOW!!