Huge news, Brad Paisley fans!! The “Weekend Warrior,” is extending his tour into 2018!!! Get ready!! Joined by Dan Tyminski and Kane Brown, he’s on his way to the DTE Energy Music Theatre on Thursday 28th June 2018 for a show that will rock your world!! Tickets on sale NOW and selling fast!! 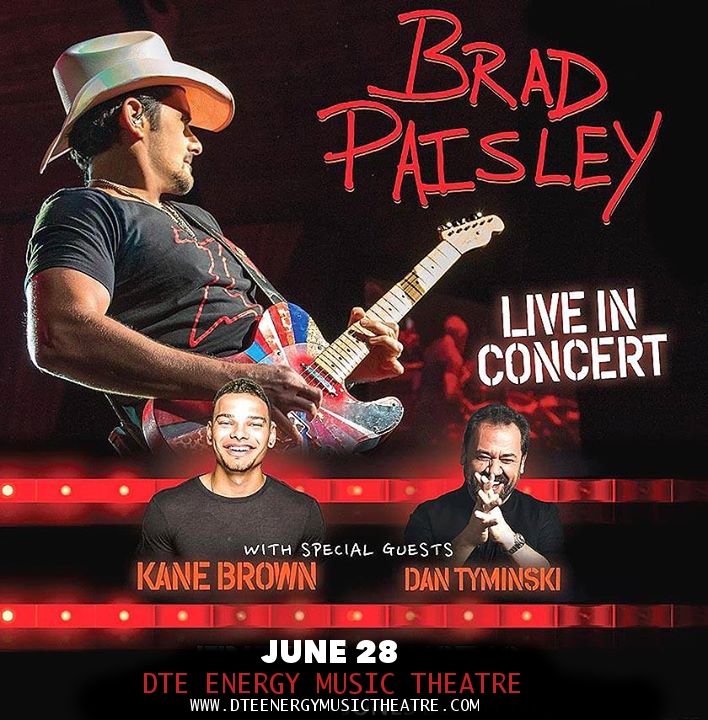 With sales of over 11 million albums in total, Brad Paisley is undeniably one of the biggest country stars in the world right now!! With an incredible eleven full length studio releases, all certified Gold or more, Brad Paisley broke the record in 2009 for the most consecutive singles to reach number one on the Billboard Country Airplay Chart. The country star’s 11th album, “Love And War,” features massive collaborations with names including Bill Anderson John Fogerty, Mick Jagger, and Timbaland!! The music videos for the singles from the album can be strung together to make a cohesive film, adding a special visual element to the album’s release. "I started getting this idea to create an entire feature-length movie around the songs in this album because each of these songs is very important to me," Brad Paisley explained in an interview, working against the wishes of his record label. ”And they have no idea how right they were because this should have never worked. We did a lot of this in the last month.”

Get ready to experience all the songs from “Love And War,” together with the hits you know and love – get your Brad Paisley tickets NOW while they last!!