The 1990s was THE decade for R&B, with soulful ballads from Boyz II Men & their female counterparts En Vogue providing the soundtrack to teenage breakups the world over… Now, you can relieve those glory days and take a trip down memory lane as the two iconic bands head to DTE Energy Music Theatre on Sunday 7th August 2016 for a night of rich harmonies, synchronized dance moves and nostalgia galore! Don't miss this chance to sing along to a night of solid gold hits! 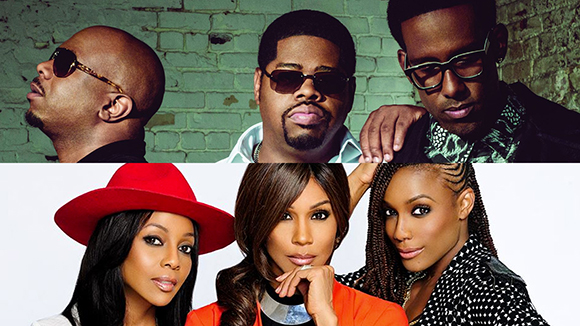 American R&B vocal group Boyz II Men was formed in Philadelphia in 1985. The band found fame in the 1990s on Motown Records as a quartet comprising of bass Michael McCary, baritone Nathan Morris, and tenors Wanya Morris and Shawn Stockman. Their international success began in 1992 with the release of their single “End of the Road,” which topped the charts worldwide and set a new record for longevity, staying at number one on the Billboard Hot 100 for thirteen weeks, breaking the decades-old record held by Elvis Presley. Boyz II Men subsequently broke this record twice again with the release of their next two hits "I'll Make Love to You" and "One Sweet Day" (with Mariah Carey). After the departure of Michael McCary in 2003 when he retired from performing due to his ongoing battle with scoliosis, Boyz II Men took a brief hiatus, but now continue to perform worldwide as a trio. Their most recent studio album, Collide, was released in 2014.