Pop punk meets hip hop as Blink 182 & Lil Wayne team up for the most fun show you'll see this summer! The two world-renowned acts are bringing their co-headlining tour to DTE Energy Music Theatre on Tuesday 10th September 2019, for a full, high-octane set each! Get ready to jump, sing, scream and let loose as they bring one helluva party to the stage! The two acts will be joined by Welsh punk rock band Neck Deep! 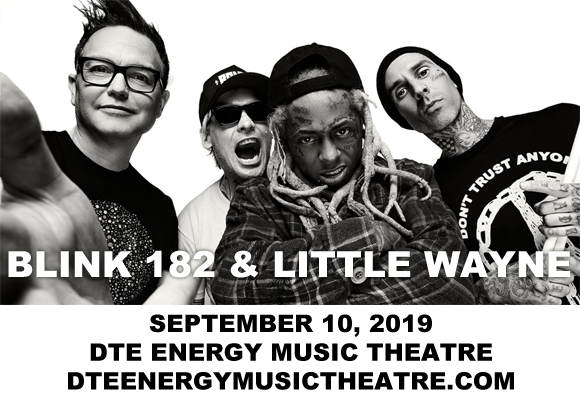 Best known for their hits "What's My Age Again?", "All the Small Things", "Adam's Song", "The Rock Show","Stay Together for the Kids" and "First Date", Blink-182 are one of the world's biggest pop punk bands. The group formed in 1995, releasing their debut album that year, and were picked up by MCA Records in 1996. In 1998, the band's original drummer, Scott Raynor was replaced by Travis Barker, and the following year the group released their third studio album, Enema of the State. The album was a huge success, launching the singles "What's My Age Again?", "All the Small Things", and "Adam's Song", which received heavy radio-play and rotation on MTV around the world. Their following album, Take Off Your Pants and Jacket, was also an international success, and cemented the group as both music video stars and the world's biggest pop punk band. After releasing an eponymous album in 2003, the band went on indefinite hiatus until 2009 when they tentatively reformed. In 2015, original guitarist and vocalist Tom DeLonge left the band and was replaced by Alkaline Trio's Matt Skiba, leaving bassist and vocalist Mark Hoppus as the only founding member. California, Blink-182's most recent album, was released in 2016.