Bluesy indie-rockers Cage The Elephant's upcoming album, Social Cues, features a guest appearance from none other than experimental art-pop artist Beck, and this summer they team up once again for the co-headlining Night Running Tour! They'll be bringing the show to DTE Energy Music Theatre on Saturday 3rd August 2019, with special guests Spoon, plus support from sibling psychedelic pop act Wild Belle! 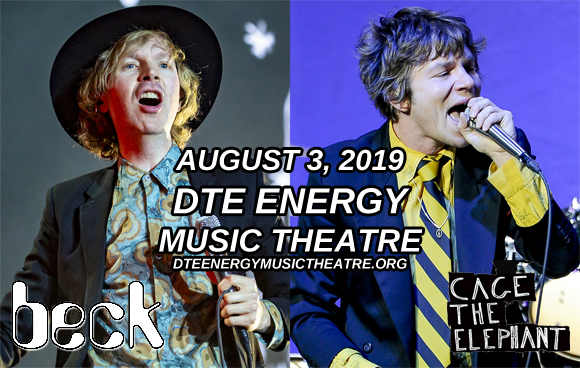 Beck is an experimental singer, songwriter, musician and record producer who rose to fame in 1994 with his debut single, "Loser", which was a global success, reaching number one in Norway and the top 10 in the US, Australia, Canada, Iceland, New Zealand and Sweden. "Loser"'s popularity paved the way for his major-label debut album, Mellow Gold (1004), which was also a commercial success, peaking at number 13 on the Billboard 200 and eventually earning platinum certification. Beck followed up with Odelay (1996), which further cemented his reputation as an important new voice in music, launching several hit singles (including "Where It's At", "Devils Haircut" and "The New Pollution") and winning two Grammy Awards from three nominations. Throughout his career, Beck has been awarded 18 awards from 57 nominations, including six MTV Awards and seven Grammy Awards. Colors (2017), Beck's thirteenth and most recent album, won Best Alternative Music Album and Best Engineered Album, Non-Classical at the 61st Annual Grammy Awards.