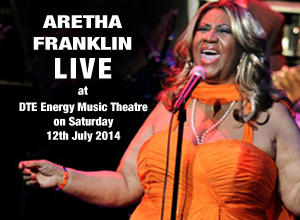 “I am customizing it for Detroit and I’m gonna bring it. Detroit is gonna love it. This is gonna be extra special for Detroit. I’ll get as many hits in as I can in an hour, 30 minutes. I’ve got a great group that I’m bringing, dancers, and I’ve got some surprises that Detroit hasn’t heard. As Sam Cooke used to say, ‘We’re gonna have a hootenanny’ — out at DTE Energy Music Theatre.” — Aretha Franklin

Expect nothing less from 'the Queen of Soul'. She's raring to give yet another commanding performance that would enthrall her die-hard fans, and give her a higher level of r-e-s-p-e-c-t! that an icon of her calibre truly deserves.

At age 72, her majestic career spans five decades of unforgettable chart-toppers such as "Respect", “Chain of Fools,” “Think,” “Freeway of Love,” “Bridge Over Troubled Water”, “(You Make Me Feel Like) a Natural Woman”, to name a few. Recognized as one of the most influential voices in America, Aretha was named the #1 Vocalist of All Time by Rolling Stone magazine, in 2009. Her numerous awards and achievements, which include 17 Grammy Awards, top selling albums and singles, numerous sold-out shows all over the world, among others, earned her honor of being the first woman to be inducted in the Rock and Roll Hall of Fame.

When the Queen of Soul sings, the world stops to watch and listen. A concert of this magnitude deserves your attention. Catch it while you can!