Heads up, hard rock fans; the legendary Alice Cooper has returned once more, and this time, he’s teaming up with Halestorm for a show that will rock your world! With special support yet to be announced, they’re headed to the DTE Energy Music Theatre on Saturday 20th July 2019 – be there!! Tickets are on sale now and already fast disappearing – pounce on that “get tickets,” button and purchase yours while you can!! 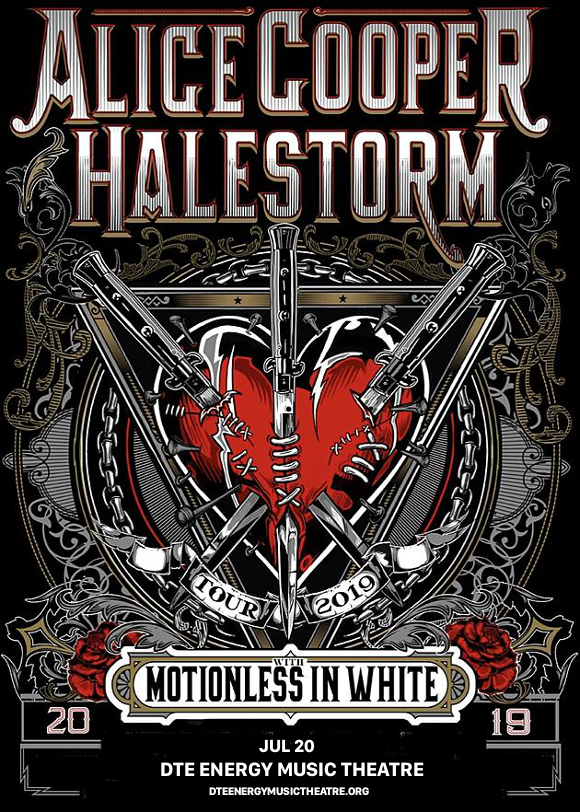 Of all classic rock musicians, Alice Cooper is without a doubt one of the best known and most instantly recognisable. The pioneer of the “shock rock,” genre, he caused uproar in the 70s for his wild stage theatrics. Drawing influences from vaudeville and horror films, he incorporated complex props and set designs into his live concerts, including guillotines, baby dolls, and electric chairs. On top of that, he was phenomenally successful, with a succession of smash hit albums and singles across a career that has spanned more than 50 years. Today, Alice Cooper is one of the most-loved names in rock n’ roll.

“We are beyond excited to announce our new tour with the man who burnt the rule book on Rock n Roll, Alice Cooper,” Halestorm said in an interview. “Alice is our A in the ABC’s of Rock music, and we are honored to be sharing the stage with such a legend and his incredible band. School’s definitely out!”

Are you ready to experience what promises to be a truly epic hard rock show for for yourself?? Then make sure you get your tickets NOW, because they’re not going to last!!