One of the greatest tours this year is set to be announced with a duo of rock legends teaming up for an immense summer outing! Aerosmith & Slash have recently sent out a flurry of tweets announcing a tour with little information on dates, all we know is that they are coming to the DTE Energy Music Theatre on Tuesday 9th September! Get in there quick and grab tickets now! 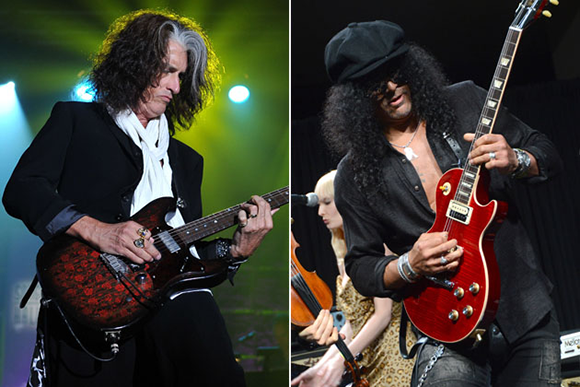 It doesn’t get much bigger than Aerosmith and Slash when it comes to American hard rock. Aerosmith have recorded some of the biggest rock hits on the planet, while Slash achieved mammoth success as a member of Guns N’ Roses. Both acts are known for their down and dirty, raw approach to rock ‘n’ roll.
Aerosmith’s most recent album is 2012′s ‘Music From Another Dimension,’ but you can be sure the band will be playing their classic hits like ‘Dream On,’ ‘Walk This Way’ and ‘Sweet Emotion.’

Slash is also prepping for an album release with his bandmates Myles Kennedy and the conspirators.