An artist with an iconic and legendary voice, Rod Stewart has an incredible musical legacy, and he's coming to DTE Energy Music Theatre on Saturday 23rd July 2021 to perform an evening of hits! Stweart has been inducted to the Rock and Roll Hall of Fame twice, has received the ASCAP Founders Award for songwriting, is a New York Times bestselling author, a Grammy Living Legend, and has been knighted for his services to music – you simply cannot miss this revered performer! Joining him in for this unforgettable show will be veteran Chicago rock band and special guest support act Cheap Trick! 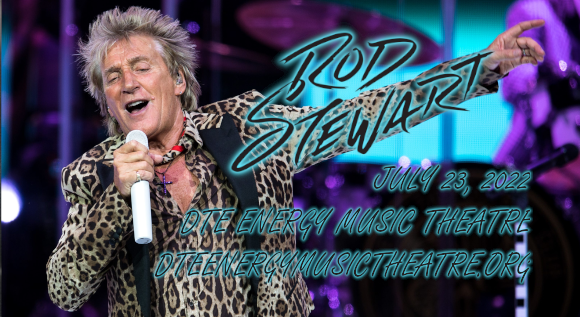 British rock singer and songwriter Rod Stewart is one of the world's best-selling music artists of all time, having sold over 120 million records worldwide throughout his career. Stewart began performing in the early-1960s, playing harmonica and singing with The Dimensions, and Long John Baldry and the All Stars. He found his first taste of fame at the end of the decade singing with The Jeff Beck Group and also with the Faces. Stewart released his first solo album, An Old Raincoat Won't Ever Let You Down, in 1969. To date, Stewart has had nine number one albums on the UK Albums Chart and 62 UK hit singles, includes 31 top 10 hits and six number ones. He has also charted 16 top 10 singles in the US, with four reaching number one on the Billboard Hot 100. He was inducted into the US Rock and Roll Hall of Fame in 1994, and the UK Music Hall of Fame in 2006, as a solo artist, and was inducted a second time into the US Rock and Roll Hall of Fame in 2012 as a member of Faces. Stuart was knighted by Queen Elizabeth II in the 2016 Birthday Honours for his services to music and charity.