Ozzy Osbourne is a true icon of modern music. Now, the Godfather of Heavy Metal embarks on his final tour, coming to DTE Energy Music Theatre on Wednesday 19th September 2018! He will be joined by rock sensations Stone Sour for this once-in-a-lifetime event!

"If you know an Ozzy Osbourne concert, you know I don't stand there with my thumb up my butt," he deadpans to Rolling Stone. "I'm rock & roll. The more fun that [the fans] have, the more fun I have." 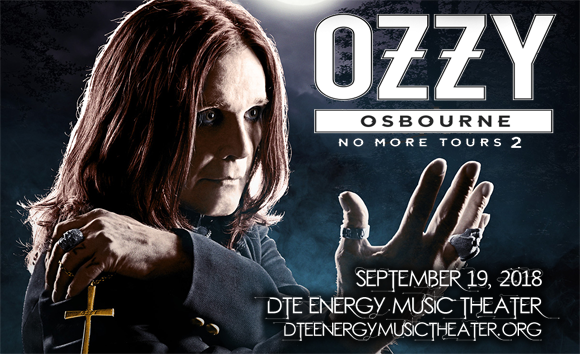 English singer, songwriter, actor and reality television star Ozzy Osbourne first came to fame as frontman of British heavy metal band Black Sabbath. Formed in 1967, Black Sabbath burst onto the music scene in 1970 with the release of their seminal eponymous debut album, widely considered to be the first heavy metal LP. Osbourne has sold over 100 million albums throughout his career, combining his solo and Black Sabbath releases. Inducted into the Rock and Roll Hall of Fame as a member of Black Sabbath and the UK Music Hall of Fame twice, as both a solo artist and as a member of the band, Osbourne has achieved great notoriety as a performer. He was also awarded the Global Icon Award at the 2014 MTV Europe Music Awards, and he received the Ivor Novello Award for Lifetime Achievement from the British Academy of Songwriters, Composers and Authors in 2015.