It's a match made in hip hop heaven as two of the scene's strongest and most revered voices, Mary J. Blige & Nas, join together for a co-headlining tour, coming to DTE Energy Music Theatre on Sunday 28th July 2019! The world-famous artists, who previously collaborated on the 1997 track "Love Is All We Need", will be performing a full headlining set each, with Blige drawing from 2017's Strength of a Woman and Nas performing tracks from last year's Nasir! 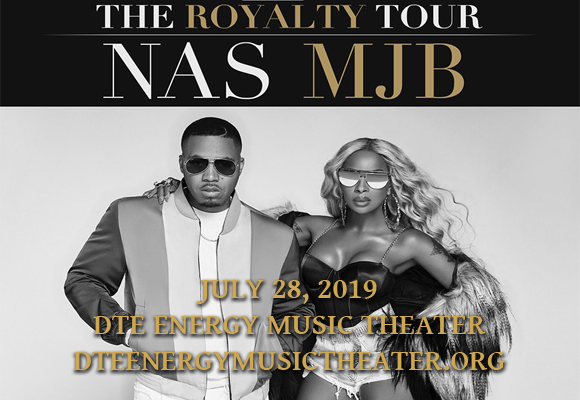 Originally an Uptown Records backing singer in the late 1980s/early 1990s, American R&B singer, songwriter, model, record producer and actress Mary J. Blige released her debut album What's The 411? in 1992, peaking at number six on the US Billboard 200 and topping the Top R&B/Hip-Hop Albums chart, as well as eventually gaining triple-platinum certification. Her 1994 follow-up,  My Life, furthered her popularity and has now charted among Rolling Stone's 500 Greatest Albums of All Time and Time magazine's All-Time 100 Albums. To date, Blige has released 13 studio albums (eight of them multi-platinum-selling) and has made over 150 guest appearances on other albums and soundtracks. Blige is a highly-awarded artist, having received nine Grammy Awards from 30 nominations, as well as a Legends Award at the World Music Awards in 2006 and the Voice of Music Award from ASCAP in 2007, and she was ranked by Billboard as the most successful female R&B artist of the past 25 years. Throughout her career, Blige has sold more than 50 million albums and 25 million singles worldwide.