What happens when you put legends of pop punk together with a superstar MC to rock over 40 cities with their fresh, live sounds? The Boys of Zummer Tour! Fall Out Boy and Wiz Khalifa come to DTE Energy Music Theatre on Friday 10th July for a co-headline show like you've ever seen before! With support from hiphop artist Hoodie Allen, this will be a night to remember! Tickets available now. 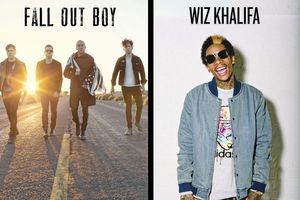 Pop punk heroes Fall Out Boy are best known for their breakthrough album From Under The Cork Tree. Released ten years ago, the double-platinum album spawned chart hits “Sugar We're Goin' Down” and “Dance, Dance” and launched Fall Out Boy into the spotlight, earning them a Grammy Award nomination in 2006 for Best New Artist. This success was matched by their 2007 follow up Infinity On High, landing a number one spot on the Billboard 200 in the first week with 260,000 sales, and producing two worldwide hit singles “This Ain't a Scene, It's an Arms Race” and “Thks fr th Mmrs”. After a hiatus from 2009 – 2012 to explore respective side projects, 2013 saw the band regroup and record Save Rock and Roll, giving the band the second number one of their career and producing triple platinum top 20 single "My Songs Know What You Did in the Dark (Light Em Up)". The band's sixth studio album American Beauty/American Psycho, set for release on 20th January 2015, was preceded by platinum top 20 hit “Centuries” and looks to cement the return of Fall Out Boy!